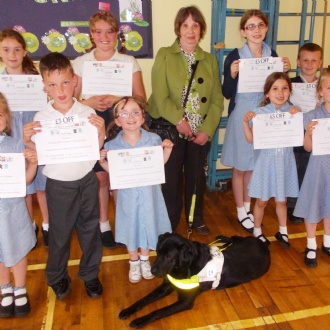 Congratulations to all those who took part in our Read to an Animal challenge.  They raised a brilliant £330 for the Guide Dogs.  This means we shall be able to sponsor a class of guide dog puppies and follow them as they train.

The pupils in each age group across the school who raised the most money were awarded a certificate and then had the opportunity to read to Susan the guide dog.  These were as follows:

The pupils in each age group who read the most books, received a  £5 book voucher for our book fair this week. They were:-

A special award was made to the pupil who shared a photograph of themselves reading with the most unusual pet.  Jake Alexander won a £5.00 book fair voucher for reading to his turkeys!